Parenting by Fathers and Grandfathers 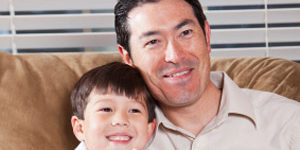 Dad Focuses on What’s Really Important:  What’s going on with my son rather than what needs to be done.

I was experiencing power struggles with my 4 year-old son especially when we were in a time crunch. I would start rushing him and giving him commands to “do it now.” This approach only caused him to dig in his heals. I didn’t want him to feel afraid of me with “an impending hammer” as I did in childhood. So, I called Cynthia for help.

Through our discussion, I realized that I was using threats such as, “If you don’t do (what I tell you to) then (something bad will happen to you.”) Cynthia taught me about a soft power approach where I first connected empathetically to his feelings by using open ended observations. I also asked open ended questions. Then, rather than pushing back, he became more cooperative. Here is an example of how I talked with my son so we actually got out of the house on time rather than being late due to a major meltdown.

Dad:  I hear you don’t want to go to school. Could you tell me what’s going on?

Dad:  Is there someone at school making you unhappy?

Dad:  If you didn’t go to school, what would you do?

Dad:  Oh, who would you play with?

Dad:  I’d love to play with you. I’m not available in the morning.

Dad:  It sounds like part of you wants to go and part of you doesn’t. I know you have friends that would love to play with you.

Son:  When I get home, can I make airplanes?

Dad:  I’m going to research how to make special airplanes and we’ll make them together tonight. Would you like that?

We left the house on time. When we got to school, my son wanted to go. He wanted to see his friends and he hugged me good-by. Even though this discussion took 20 minutes, I know if I pushed him he would have had a meltdown, we would have been late and everyone would have felt bad. By controlling myself and using a more soft power approach my son cooperated and felt happy. Thank you Cynthia

©2012 Cynthia Klein has been a Certified Parent Educator since 1994. She works with dads, moms and organizations who want more cooperation, mutual respect and understanding between adults and children of all ages. Cynthia presents her expertise through speaking, webinars, and private parent coaching sessions. She is a member of the National Speakers Association and writes the Middle School Mom column for the magazine Parenting on the Peninsula. Contact Cynthia at bridges 2 understanding, bridges2understa.wpstagecoach.com or call 650. 341.0779.